7 years is a long time to hang with a squirrel 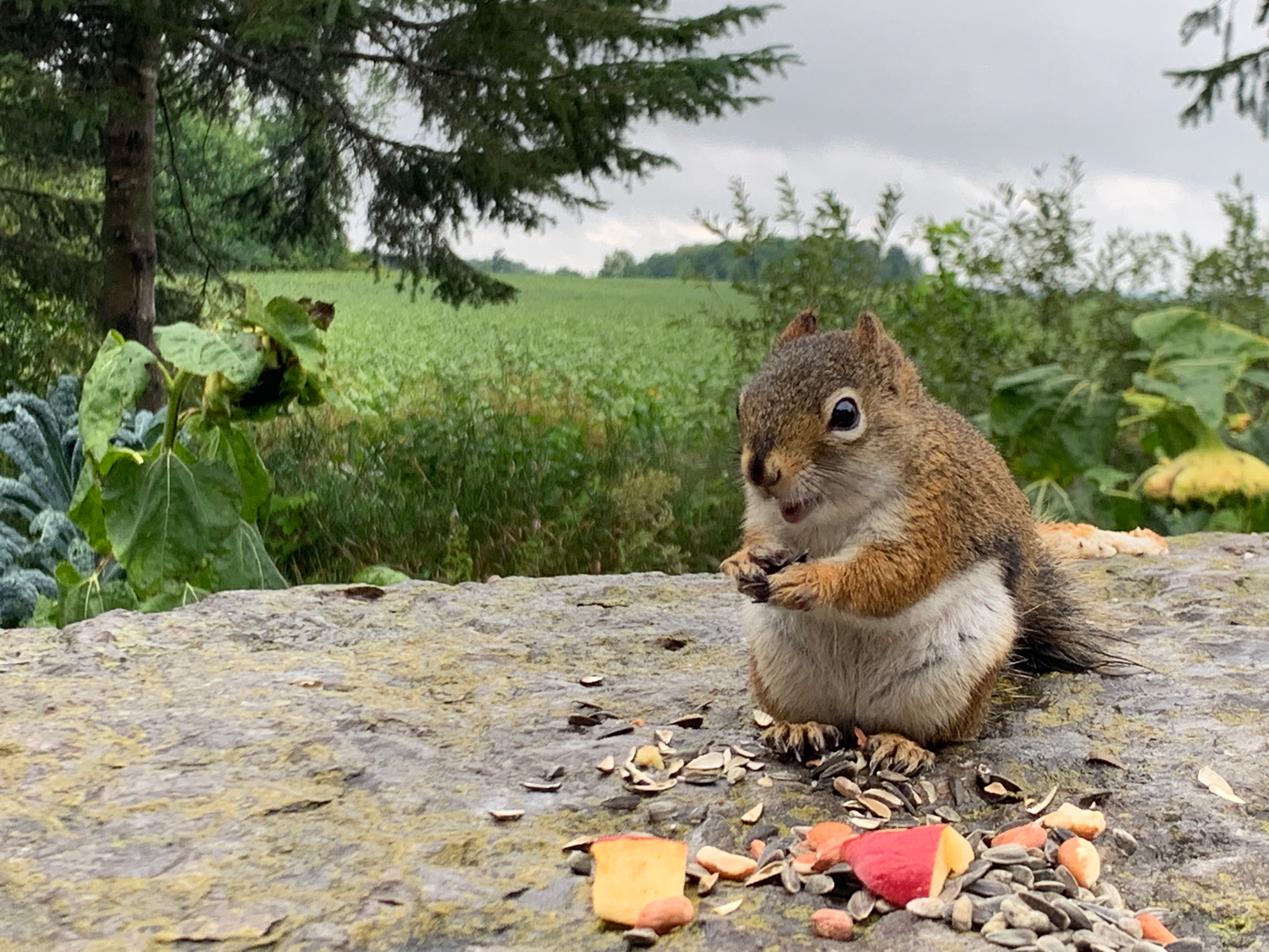 Over the years, I have jotted down over 500 ideas for Children’s books. About 250 of them are in a document and 250 are stuck in an old Samsung phone that is locked and cannot be opened.… yet 🙏🏻

Chelsea, the red squirrel, is the dental hygienist in The Treetop Tooth Shop story. Over the last 7 years that we’ve been exchanging, I notice that she is not like the other squirrels out there.

The squirrels on this land are her great great great great etc,..... I mean, she's had 11 litter in 7 years, averaging 4 kittens per litter. That's a BIG family. Chelsea is NOT like any of them. It might be because I hand raised her. She has always moved carefully. The others are rough and careless. Lol!

Currently, there are 13 red squirrels living on this 5 acre lot. They usually defend between 1 and 8 acres, so it’s a little squished right now. Until the beginning of the fall there were at least double that amount, including babies. As they become independent, they search out their own territories and may the strongest red squirrel win. Sometimes, if they’re lucky, the Mother squirrel will give up her territory to one of her kids.

On Wednesday, September 2nd, they finally completed the illustrations for The Treetop Tooth Shop. The next morning, September 3rd, Chelsea visited. She was in hysterics. She stood on her hind legs, with her paws up against the kitchen sliding door. I opened it and she tried to come in, so I closed it quickly to fetch some nuts & seeds.

I opened the door, knelt down, and as I placed my closed hand before her, she frantically grasped at it. She grabbed a seed from my palm, sat there and ate it. I dumped the rest of the seeds onto the step, closed the door, went to get my camera and halfway there, decided, no... I don’t think I want to take a picture of her. As I acknowledged that thought, I somehow felt that this would be the last time I’d see her.

Early Sunday morning, September 6th, they showed her to me in a vision for a brief 3 seconds. My eyes were still closed, and I wasn’t dreaming. She was lying on her right side, legs reaching out in front of her, and hind legs stretched behind. She looked healthy. The image appeared as a “screen shot.” For me, there was no ambiguity; I felt I was being shown she was gone. When I opened my eyes, I cried. And I cried. I mean a lot. I can’t even explain the sorrow I was experiencing. How is it possible that she would vanish one day after the completion of the illustrations? In all the 7 years, why that day?

The longest I've gone without seeing Chelsea is 3 weeks. Every time she doesn’t show, I think something terrible has happened to her. This time, it truly felt SHE WAS GONE. My heart was broken... I mean truly broken.

That afternoon I was guided to the west side of the land. I spotted a young oak tree branch reaching out from the overgrowth. It had clusters of acorns. Each cluster contained varying numbers and sizes of acorns… reminding me of community, but certainly not the squirrel community. As adults, there is NO squirrel community because they DO NOT like to live together, they DON’T share well, they DON’T help each other. They are all out for themselves. Oh! And they steal from each other too!

4 and a half weeks later, on October 3rd, I dreamt I was upstairs, standing, looking out the back sliding door. I could see something to my right, dangling in midair. It took a few seconds to realise it was Chelsea! But I couldn’t figure out how she could be “dangling.”

Then I noticed she was clutched in the talons of a large bird. I ran down the stairs, opened the back door, jumped outside and started running after them. And as I looked up, Chelsea and I made eye contact. We stared at each other for 3 seconds, then she let the weight of her head down. She was carried away, and I stopped running.

Squirrels defending their territory is serious business. Red squirrels are the worst. They are relentless. Poor Chelsea got kicked out of every home she made since October 2019, including the one in my roof! Within one year, she probably made 7 different homes, and all were taken over by one of the younger squirrels.

On that last day that I saw Chelsea, why was she so frantic? Was she not coming around because she moved so far away and it was too difficult to get past the other red squirrels defending their territory? Did this stress her because it had been a real challenge to visit with me? Maybe it was the feral cat that suddenly came around? Was she just starving?

The last home I saw Chelsea occupy was under the deck of the dental hygiene office entrance. She seemed okay there but at night time, when the lamp post goes on, so does the waterfall pump and it’s noisy. Chelsea wouldn’t have liked that and would have left because of it.

Maybe I should have disconnected the waterfall pump or stayed with her at the door that day while she ate? So, for the last 2 months, my heart has been heavy. Could I have done better?

On October 30th, I picked up my sample copy of The Treetop Tooth Shop and three days after, making that 2 months later… guess who shows up? Chelsea and I had an awesome emotional reunion. Her timing was excellent! She even let me rub her belly!! AND she seemed to approve of the book too!

This has taught me that no matter how convinced we may be of our own narratives, we MUST leave room for other possibilities, especially when the narratives we nurture, create discomfort, sadness and worry. We need to train our brain and dismantle the synapse that continually plays negative scenarios that contribute to our pain and sorrow.

So Chelsea is back! She looks healthy, I'm feeling good, feeling inspired to move ahead and keep writing.